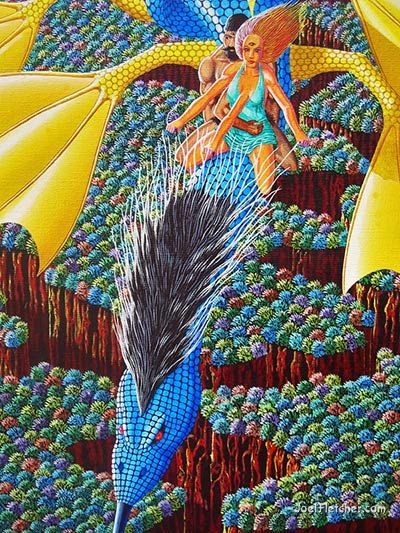 “It combines fantasy, philosophy, and science fiction in an exploration of the nature of good and evil and their relationship with existence. Described by critic, novelist, and philosopher Colin Wilson as the “greatest novel of the twentieth century”, it was a central influence on C. S. Lewis’ Space Trilogy, and through him on J. R. R. Tolkien, who said he read the book “with avidity”. Clive Barker called it “a masterpiece” and “an extraordinary work … quite magnificent.”

We would like to introduce this novel to you. First, an introduction below, followed by summaries of each chapter. Then, a two-act play of the sci-fi novel, with a follow-up from Douglas and others on how this novel inspired today’s modern sci-fi and what spiritual lessons are contained within for the spiritual seeker.

BOOK REVIEW: “A Voyage to Arcturus” by David Lindsay

A seance is organised in Hampstead to which Maskull and Nightspore are invited; their late arrival is marked by a supernatural noise. The medium causes a smiling man to materialise. Krag arrives uninvited, kills the apparition by breaking its neck, and summarily calls Maskull and Nightspore (with whom he was acquainted) out to the street.

Krag invites Maskull and Nightspore to come to Tormance, a planet orbiting Arcturus, whence the apparition comes. Maskull initially treats the proposal as a joke, but accepts it when Krag shows him, with a small but strangely heavy and potent lens, that Arcturus consists of two suns. Upon questioning from Nightspore, Krag says that Surtur (unknown to Maskull) has gone ahead and that they must follow him.

Maskull and Nightspore arrive on foot (after travelling by train) at the Scottish observatory of Starkness, where Krag was to meet them, only to find the observatory abandoned. Two bottles are found with “Solar back rays” and “Arcturian back rays”. The first, when accidentally unfastened, flies back to the sun because of the light rays trapped within.

Nightspore leads Maskull to a spot on the shore some miles off, where they listen to The Drum Taps of Sorgie, and tells him that if he hears it again he is to “try always to hear it more and more distinctly.” Maskull attempts to climb the observatory tower but is unable to go beyond the first of the seven stories because of the heavy gravity. From the first magnifying window he sees Arcturus again. He hears a voice saying that he is but an instrument and that although he will go on the voyage, only Nightspore will return.

5 – The Night of Departure

Nightspore says the gravity in the tower is Tormance’s and that Maskull will find death on Tormance. Krag arrives, enables Maskull and Nightspore to resist Tormance’s gravity by spitting on a cut in their arms, and the three climb the tower, whose windows no longer magnify. They depart naked in a ‘torpedo of crystal’ propelled by Arcturian back rays. During the 19-hour voyage, Maskull sleeps.

Maskull awakes alone in a desert on Tormance and finds that he has new organs in his body, such as a tentacle (known as a magn) stemming from the heart and protuberances on his forehead and neck. A woman comes to him and exchanges blood with him (making it easier for him to live on Tormance, and harder for her), and says: that she is called Joiwind, her husband Panawe, and both live to the North in Poolingdred; that she understands his speech thanks to a forehead organ, the breve, that reads minds; that Surtur is called Shaping, or Crystalman, and created everything (she also implicitly says that he is God); that they do not eat, out of respect for living things, but drink gnawl water; and that the chest tentacle is used to increase love for other creatures. While journeying home they worship Shaping in a shrine, and meet Panawe upon arrival.

Panawe suggests that Maskull may be “a man […] who stole something from the Maker of the universe, in order to ennoble his fellow creatures,” a reference to the myth of Prometheus. He says that life on Tormance has many different forms because the planet is still new, that human beings resemble earthlings because “all creatures that resemble Shaping must of necessity resemble one another,” and that Alppain is visible only to the North. Panawe tells his story to Maskull; he travelled in the Wombflash forest (from where he saw Swaylone’s island), Ifdawn Marest, and Poolingdred.

Maskull sets out to further explore Tormance and gets to the Lusion Plain, where he meets a man, named Surtur.

Surtur asserts the beauty of his world, claims Maskull is there to serve him, and disappears. Maskull continues his journey and meets a woman, Oceaxe, from Ifdawn, who instead of a tentacle has a third arm. Although she is peremptory and rude, she shows interest in having him as lover, and gives him a red-glowing stone to convert his magn into a third arm.

When Maskull wakes up he finds his chest tentacle or magn has been transformed into the third arm, which causes lust for what is touched and his breve changed to an eyelike sorb which allows dominance of will over others. He travels through the volatile and Nietzschean landscape of Ifdawn with Oceaxe, who wants him to kill one of her husbands, Crimtyphon, and take his place. Maskull is revolted at the idea, but does kill Crimtyphon when he sees him using his will to force a man into becoming a tree.

Tydomin, another wife of Crimtyphon’s, shows up and uses her will to force Oceaxe to commit suicide by walking off a cliff and persuades Maskull to follow her to her home in Disscourn, where she will take possession of his body. On the way they find Joiwind’s brother Digrung who says he will tell her everything; to prevent this, and encouraged by Tydomin, Maskull absorbs Digrung, leaving his empty body behind. At Tydomin’s cave, he goes out of his body to, anachronistically, become the apparition of the seance where he met Krag, but when he is killed he goes back to his body before Tydomin can possess it, whereupon he awakens free of her mental power.

Maskull takes Tydomin to Sant, to kill her. In Sant no women are allowed, but only men, who go there to follow Hator’s doctrine. On the way Maskull and Tydomin meet Spadevil, who proposes to reform Sant by amending Hator’s teaching with the notion of duty. He turns Maskull and Tydomin into his disciples by modifying their sorbs into twin membranes called probes.

Catice, the guardian of Hator’s doctrine in Sant, who has only one probe, damages one of Maskull’s to test Spadevil’s arguments. Maskull accepts Hator’s ideas and kills Spadevil and Tydomin. Catice says he will leave Sant to meditate on Spadevil’s arguments, claims that Shaping is not Surtur, and sends Maskull away to the Wombflash Forest, in search of Muspel, their home.

Maskull awakes in the dense Wombflash Forest with a third eye as his only foreign organ, hears the drumbeat, follows it, and meets Dreamsinter, who tells him that it was Nightspore whom Surtur brought to Tormance and that he, Maskull, is wanted to steal Muspel-light. Maskull then sees a vision in which Krag kills him while Nightspore follows a light, and faints.

Maskull reawakes and proceeds to the shore of the Sinking Sea, from which Swaylone’s Island can be seen. There he meets Polecrab, a simple fisherman, who is married to Gleameil.

Maskull goes to Swaylone’s Island, where Earthrid plays a musical instrument called Irontick (actually a lake) by night, and from where no one who heard it ever returned. Maskull is accompanied by Gleameil, who has left her family because of the attraction of the music. Earthrid warns Gleameil that the music he plays will kill her, but she stays and promptly dies. Maskull, after entering a trance, forcibly plays the lake, whereupon Earthrid dies, violently dismembered, and Irontick is destroyed.

Maskull crosses the sea by manoeuvring a many-eyed, heliotropic tree and reaches Matterplay, where much to his amazement a plethora of life-forms alongside a magical creek materialise and vanish before his eyes. He goes upstream and meets Leehallfae, an immensely old being (“phaen”) who is neither man nor woman, but of a third sex, who has been seeking the underground country of Threal for eons, where ae [sic] believes a god called Faceny (which may be another name for Shaping) is to be found.

They reach Threal by entering a cave. Leehallfae promptly falls ill and dies. Corpang appears and says this is because Threal is not Faceny’s world, but Thire’s. Faceny, Amfuse, and Thire are the creators of three worlds of existence, relation, and feeling. Corpang has come to Threal to follow Thire, and leads Maskull to three statues of these divinities. There Maskull has a vision of their power, and hears a voice saying he is to die in a few hours, after which the statues are seen with faces like a corpse’s, showing that they are merely disguises for Shaping/Crystalman. Realising that he has been worshipping false gods, Corpang follows Maskull to Lichstorm, where they hear the drumbeats.

Maskull and Corpang meet Haunte, a hunter who travels in a boat that flies thanks to masculine stones which repel earth’s femininity. After Maskull destroys the masculine rocks which protected Haunte from Sullenbode’s femininity, all three journey to her cave. Sullenbode, a faceless woman, kills Haunte as they kiss.

Maskull desires Sullenbode and she desires him, thereby becoming alive (without killing him) as long as he loves her. Maskull, Sullenbode and Corpang proceed in the direction someone looking for Muspel once went. As they near their destination, Corpang goes eagerly ahead but Maskull stops, caught in a vision of Muspel-light. His momentary loss of interest and her inability to recall him from his trance causes Sullenbode to die. As the vision fades Maskull discovers Sullenbode and, leaving Corpangs path, proceeds down the mountain to bury Sullenbode.

Maskull, upon waking, discovers Krag again, and then Gangnet, who defends Shaping and his creation. Since Gangnet is unable to send the abusive Krag away, they travel together to the ocean and then take to the sea on a raft. When the sun Alppain rises, Maskull sees in a vision Krag causing the drum beat by beating his heart, and Gangnet, who is Shaping, dying in torment enveloped by Muspel-fire. Back on the raft, Krag tells Maskull that he (Maskull) is Nightspore; then Maskull dies.

Krag and Nightspore arrive at Muspel, where there is a tower similar to that in Starkness (the observatory in Scotland). From the windows of its several stories Nightspore sees that Shaping (the Gnostic demiurge) uses what comes from Muspel to create the world in order that he may feel joy, fragmenting the Muspel matter in the process and producing suffering for all living things. Krag acknowledges that he is Surtur and is known on Earth as pain. Nightspore goes back with him to reincarnate and spread knowledge about Surtur, Shaping, and Muspel.

A Voyage to Arcturus – ACT 1

A Voyage to Arcturus – ACT 2

A Voyage To Arcturus – What’s it all about?